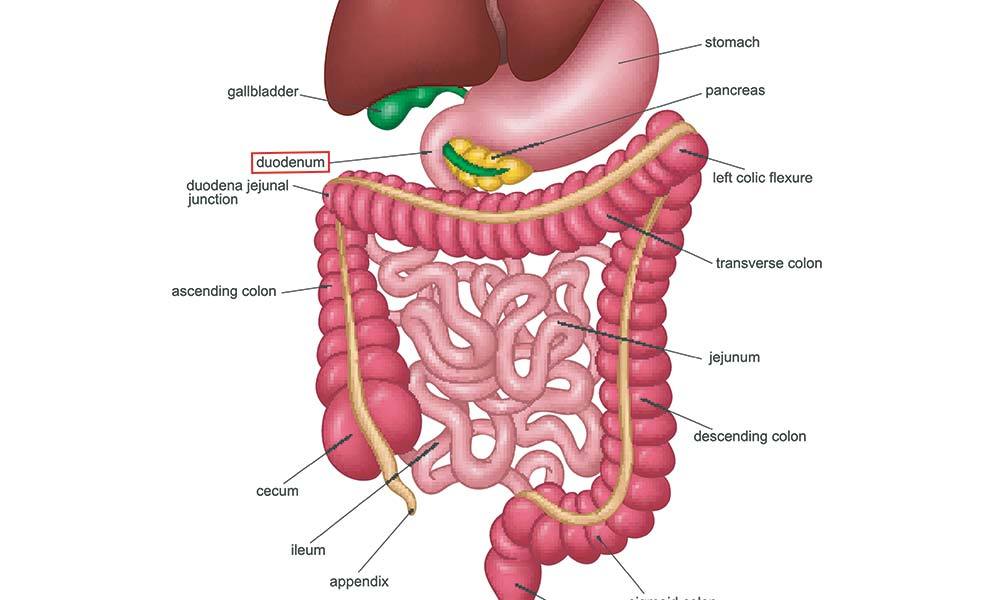 If you’re like most people, you enjoy good food at a meal and then don’t think about it again. But when the food goes into our mouths, that is only the start of a complex and fascinating journey of digestion through the gastrointestinal tract in order to fuel our bodies with energy and nutrition. One of the first stops along that journey is the section of the small intestine just below the stomach, called the duodenum.

Structure of the Duodenum

The structure of the duodenum is like a hollow tube, and has four layers. These four layers are the same as the layers in the wall of the stomach. They are the mucosa, submucosa, muscularis, and serosa.

The whole duodenum is about 25 cm long. In fact, the name duodenum was given to this part of the small intestine because of its length. The name came from the Latin phrase “duodenum digitorium” which means the space of twelve digits, or fingers. That measurement is approximately the same as the average length of the duodenum.

The Function of the Duodenum

The purpose of the duodenum is to continue the process of digesting the food that began in the stomach. Digestive fluids from the stomach and enzymes secreted by the walls of the small intestine work together to break down food as it travels through. The duodenum also regulates hormones that are part of the digestive process and uses fluids from the liver, gallbladder, and pancreas.

The work of the duodenum is complex and requires a consistent supply of blood. It receives this blood supply from various arteries, including those that run to the nearby pancreas. It also contains highly sensitive aspects of the nervous system in order to respond to the constantly changing flow of food and fluid through the digestive tract. The lymphatic system is also connected to the duodenum which receives and drains lymphatic fluids. An important part of the body’s immunity, this allows for the removal of toxins from the system.

We’ve all felt the effects when something interferes with the proper functioning of the digestive tract. Stomach aches, bloating, constipation, and diarrhea are all common symptoms that something isn’t quite right. Inflammation of the duodenum is called duodenitis. Because the duodenum is directly connected to the stomach, gastritis (inflammation of the lining of the stomach) and duodenitis often occur together. They are typically caused by the same things and require the same treatments.

The most common cause of duodenitis is infection by a bacteria called Helicobacter pylori (H. pylori) bacteria. These bacteria are common in the digestive system and don’t pose a problem. The bacteria are typically harmless, causing no discomfort or complications. However, sometimes the bacteria grow out of control and cause inflammation and other symptoms.

Both gastritis and duodenitis can also be caused by the use or overuse of certain medications. The most common medications to cause duodenitis are non-steroidal anti-inflammatory drugs (NSAIDs). Ibuprofen, aspirin, and naproxen are all examples of NSAIDs.

These common causes are typically the reason for inflammation, but they are not the only reasons gastritis and duodenitis develop. Issues like recent surgery or traumatic damage to the abdomen, certain cancer treatments, heavy alcohol or tobacco use, and even the use of a breathing machine can all contribute to inflammation.

Other Complications of the Duodenum

Because the duodenum is at the connecting point between the stomach and the intestines, there are many gastrointestinal issues that involve the duodenum. Reflux, specifically biliary reflux, occurs when the bile present in the duodenum for digestion flows upward into the stomach and esophagus. This is similar to but different from acid reflux, or gastroesophageal reflux disease (GERD). However, the two often occur alongside each other.

Duodenal ulcers may also be present. Duodenal ulcers (sometimes called peptic ulcers) are the erosion of the mucosa in the duodenum. These ulcers are painful but can be treated. If the ulcer is left untreated and causes a complete perforation of the wall of the intestine, emergency surgery is necessary to repair it.

Blockage can also occur in the duodenum. When there is partial or complete obstruction of the small intestine, food can no longer flow through to the large intestine. This can cause gas and waste matter to build up against the blockage. Common causes of a blockage include scar tissue, hernias, tumors, and damage to the folds of the intestine due to inflammatory bowel diseases like Crohn’s disease or diverticulitis.

Symptoms and Treatment of Duodenal Cancer

Duodenal cancer does occur but is rare. Symptoms like abdominal pain and unexplained weight loss, diarrhea, fatigue, and nausea are similar to the symptoms of many other conditions, and make duodenal cancer hard to diagnose. When diagnosed, treatment typically includes the removal of a tumor through surgery. Other treatment possibilities include common cancer treatments like chemotherapy and radiation therapy, or a newer treatment called biologic therapy. Risk factors that increase your chances of developing duodenal cancer include age, gastrointestinal diseases like Crohn’s or Celiac, colon cancer, smoking, alcohol use, and poor diet. Although difficult to diagnose, early treatment can improve your outlook, so don’t hesitate to talk to your doctor about any symptoms you experience. The duodenum is just one part of the digestive tract.

The doctors and staff at Asheville Gastroenterology Associates are here to help you with all aspects of prevention, diagnosis, and treatment of gastrointestinal conditions. If you are experiencing unexplained abdominal pain, weight loss, or other abdominal symptoms, make an appointment today. We are committed to providing you with high quality, comprehensive healthcare in the field of digestive disease.